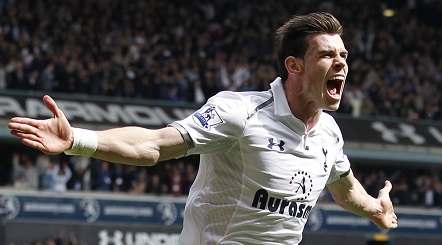 Recently we covered an article on Spurs greatest ever signings. The criteria was based on the amount of money paid in relation to the value that the club had while the player was at White Hart Lane.

While there would inevitably be a lot of debate about who should and shouldn’t have been included, there’s unlikely to have been any argument about the man who topped the list. Gareth Bale joined Spurs from Southampton in 2007 for £7 million and there are many who would argue that he’s the greatest player to have ever graced the White Hart Lane turf.

Bale has obviously shown promise on the South Coast but his most notable attribute at the time was his threat from dead ball situations. His first league goal for the Saints came direct from a free kick against Derby County in 2006 and this seemed, at the time, to be his most potent threat.

As we all know, the Welsh international was deployed at left back when he first arrived at White Hart Lane in 2007. It might seem ridiculous now but that was his position and in those early days, there was no sign of the brilliance that would follow.

However, there were three goals in his first four games for Spurs, including another brilliant free kick but there was to be a ‘stop start’ element to his early White Hart Lane career. It started with an unfortunate stat where Tottenham were unable to win when Bale featured and the 2007/08 season then ended prematurely with a long term injury.

The site of Gareth Bale on crutches as his team mates celebrated the 2008 League Cup win over Chelsea rather summed up those initial exchanges.

One Night in Milan

Gareth Bale truly announced himself to the world on October 20, 2010. He returned from injury and things were looking much brighter but it had taken three years for anyone to really take notice. Bale had already scored Spurs’ first goal of their Champions League campaign (excluding the qualifying round) against FC Twente but he would need to intervene in what was ultimately a losing cause.

Against Inter we were 4-0 down inside 35 minutes and without our keeper, Heurelho Gomes, who had been red carded. It’s fair to say that it wasn’t a promising position and to emerge without conceding another goal would have been enough of an achievement. Bale had other ideas and a brilliant second half hat trick had Spurs fans dreaming of the unthinkable.

We couldn’t quite rescue a point but another Bale-inspired performance in the second leg aided our progress into the knockout stages. The Welshman’s career had taken off and it’s also fair to say that this one single performance had put Gareth Bale on the radar of the top sides in Europe.

Pushed further forward, the left winger was now scoring spectacular goals from all over the pitch. Spurs were a tougher side with Bale and Lennon on the flanks with Rafael Van Der Vaart down the middle. We couldn’t quite get over the line in terms of Champions League qualification but that side was laying a platform that is bearing fruit today.

In the next two seasons, the Welshman would rescue the side on numerous occasions and there were so many spectacular goals – the double against Stoke, crucial strikes against Arsenal and a particularly memorable late, long range effort against West Ham.

You can even get a YouTube video up which lists occasions when Gareth Bale rescued Spurs. They were heady times, even if we couldn’t quite sneak into the top four but sadly, we knew it could never last.

After much speculation, Gareth Bale joined Real Madrid in the summer of 2013 for a fee in the region of £85 million. It was a significant return on that £7 million outlay but it would inevitably leave a big hole in the side. We’d sold Elvis and signed the Beatles said Garth Crooks but in reality, we’d largely got an out of tune tribute band that were quickly asked to leave the stage.

Talk of a return continues now that Spurs have been regulars in the Champions League but who knows? For now, while we lament his leaving, we can only round off by including Gareth Bale in this blog’s personal hall of fame.