Tottenham have moved to complete their third signing of the summer with Matt Doherty joining from Wolves in a deal believed to be worth around £15 million. The 28 year old right back has put pen to paper on a four year contract and looks to be heading straight in as first choice in that position.

Having spent the last seven years at Molineux, the Republic of Ireland international has been a virtual ever present since Wolves returned to the Premier League and he’s been an important part of their success under Nuno Espirito Santo.

Speaking to the press following the announcement, Doherty said:

I’m very proud to be joining such a big club.

The best stadium in the world and possibly the best training ground in the world. Once I knew there was interest it was a no brainer for me.

What will be Bring? 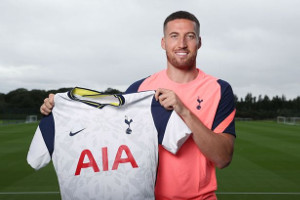 It’s said that Matt Doherty does like to bomb forward and, for a right back, he has a reasonable scoring record. The defender left Molineux with an overall record of 28 goals in 302 matches, including seven last season and, while scoring isn’t his role, it does suggest that he’s more of a right back in the Kieran Trippier mould.

Statistics from whoscored.com would, however, suggest that his crossing is weak while aerial duels are a particular strong point. It would just be nice to see some calm defending but that link up play into the front third will always be useful.

Doherty’s arrival looks to spell the end for Serge Aurier at the new White Hart Lane. The defender has been criticised for his error prone displays at the back and the mistrust amongst fans looks to have spread to the manager.

If press reports are to be believed, Aurier has already rejected the chance to join AC Milan and also to move up to Wolves to slot in as Doherty’s replacement. Other news stories suggest that the switch to Milan is the more likely with the clubs so far failing to agree on the transfer fee.

With Kyle Walker-Peters having made his loan move to Southampton a permanent one, Serge’s departure would leave us looking a little thin on the right side of defence. There is the potential for Juan Foyth to move across as cover when necessary but will we actually see Aurier stay at Spurs and look to battle with Doherty for that right back position?

In other news, Spurs have been drawn against Lokomotiv Plovdiv in the second qualifying round of the Europa League. At this stage of the competition, the games are single leg affairs which will naturally be played behind closed doors.

Plovdiv play in the top flight division in Bulgaria where the side finished in fifth place last season. They beat Iskra of Montenegro 1-0 in the previous round and, while they’ve enjoyed little in the way of European progression, they could pose a threat depending on which starting XI Jose decides to field.

We’ll have a full preview of that game in the week leading up to kick off.