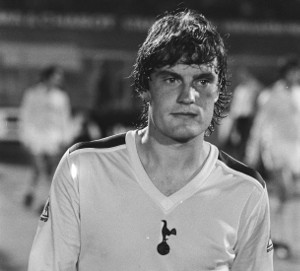 When setting up this website we knew that at some point, we would be faced with an impossible task – listing the best players to have ever signed for Tottenham Hotspur Football Club. It would be easy enough to cover a top 50 or even a top 100, in which case it would be tough to imagine that any two lists would be the same.

So, we’re going to cover this as a series – in no particular order and we’ll start with the best player I have ever witnessed.

In the days when matchday programmes were somewhat less wieldy than the Magnum Opus which is produced today, readers of the youth and reserves section started to become aware of the name Glenn Hoddle during the first half of the 1970s.

A regular scorer from midfield as he moved through the ranks, Glenn made his first team debut at the age of 17. He replaced Cyril Knowles as a substitute during a division one game with Norwich in August 1975

Early displays were promising enough before a major breakthrough came on Glenn’s first official start for the club. Spurs were away to Stoke City and Hoddle scored the winner: ‘Needs a lob from Hoddle’ said the commentator as he simply drove it through a wall of players. That set the tone for a brilliant Tottenham career because Glenn never dealt in tap-ins.

In today’s game, a player of Glenn Hoddle’s calibre would not care for a spell in the second tier of English football. His presence in the old division two was remarked upon at the time but in the days when more loyalty was evident among players, there were few question marks over his place at the club.

It was an unhappy position to be in but for those of us who are old enough to remember that campaign, 1977/78 was an enjoyable season. There were plenty of goals at the right end of the pitch with the 9-0 victory over Bristol Rovers going down as the highlight but the defence was calamitous enough to keep other sides interested. It eventually went down to the final game of the season when a 0-0 draw away to Southampton was enough to see Spurs promoted in third place.

Spurs scored 83 goals in that season, comfortably more than any other side. Glenn Hoddle scored 12 of them, assisted many more, and he finished with 13 from 45 in all competitions.

The game is about glory so when Spurs returned to the old first division at the start of the 1978/79 season, they made sure they were prepared. The signings of Argentines Ricky Villa and Ossie Ardiles shook the world and gave Tottenham a midfield that would be the envy of any top flight side.

With Hoddle pulling the strings, Tottenham consolidated for a season or two before a glorious period in the early 1980s. Back to back FA Cup Final wins in 1981 and 1982 featured goals by Glenn and some serious silverware for the first time since the end of the Bill Nicholson era.

1984 brought more glory with a second UEFA Cup triumph but Hoddle was, by then, struggling with a long term injury. By the mid-80s, Burkinshaw had gone, and Spurs were in transition but while Glenn’s time at White Hart Lane was coming to an end, there would be one last hurrah.

How Tottenham failed to win a trophy in the 1986/87 season remains a mystery. For many of us, this was the most entertaining campaign since that spell in the second division. Both failed to land any silverware but the football was breathtaking.

Clive Allen may have scored 49 goals but Glenn Hoddle was at the heart of it all once again. He signed off with a spectacular solo effort against Oxford United but the enigma that was Glenn haunted the FA Cup final. Against Coventry City, he was largely anonymous in the 3-2 defeat.

With Hoddle having already agreed to sign for Monaco, Brian Clough had said we should leave him out of that Cup Final squad. Maybe he had a point but that would have been disingenuous to one of the greatest players to have pulled on a Lilywhite shirt.

What should we remember about Glenn? Simply take a look back at those spectacular goals: We’ve mentioned that final effort against Oxford but what about the drag back and chip at Watford? There are the volleys against Manchester United in the League Cup and against Forest when the ball didn’t touch the ground from the keeper’s clearance.

If you were too young to see him in his pomp, just think of Christian Eriksen x1000 and then head to YouTube. Type in ‘Glenn Hoddle goals’ and enjoy.