Harrys at the Double

Another international break proved to be a successful one for Spurs players, particularly within the England set up. Harry Kane scored four times in two Euro 2020 Qualifying games while Harry Winks opened his senior account for the Three Lions.

The days of having five Spurs players involved are behind us for now but while we may not be providing quantity to the national side, there’s plenty of quality driving the team on.

Kane completed a first half hat trick against Montenegro on Thursday night and with no penalties involved, it gave little for social media critics to complain about. England’s skipper added a single strike to his tally on Sunday afternoon as the Three Lions breezed past Kosovo by four goals to nil.

Spurs fans may feel that Harry has experienced a slow campaign at club level and it could be argued that it’s been a lean period in the Premier League. However, our main striker has registered 10 goals in 15 games across all competitions but when you add in his England performances, the tally becomes quite spectacular.

Kane’s goal against the Kosovans was his 20th of the season for club and country. He’s scored in all of England’s 2020 qualifiers and, not surprisingly, he now leads the list of overall goal scorers with 12 strikes in qualifying.

Hopefully he can now take advantage of better service to accelerate on the domestic front when Tottenham Hotspur return to league matters against West Ham United this Saturday lunchtime. 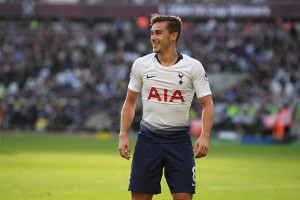 While Kane continued to rise up the list of England’s all time leading scorers, another Harry scored his first international goal at senior level. Harry Winks was undoubtedly aided by the Kosovan defence who parted the ways to allow him to slot home unchallenged to open the scoring on Sunday.

Winks notched his first goal in six appearances for the Three Lions and it capped a fine weekend for the 23 year old who many had listed as their man of the match for both games. Winks’ performances also drew comparisons with Michael Carrick and that’s not a bad suggestion to carry around. Goals aren’t the main part of his game but it’s always a bonus to find the back of the net and, like Harry Kane, we can also hope that Winks carries that form over to the London Stadium this weekend.

In other international news, our reserve striker Troy Parrott made his full international debut for the Republic of Ireland as they took on New Zealand in a friendly. The teenager didn’t get a goal in the 3-1 win but he held his own amongst some tough defending and earned praise from manager Mick McCarthy.

Parrott has appeared just once for Spurs this season but as talk emerges of a new contract for the 17 year old, it’s hoped that he may reappear on the subs bench very soon. It’s a big ask for the youngster to add scoring support but with Tottenham struggling in the league, this exciting talent may not be kept under wraps for much longer.

Overall, it was a positive few days during the international break so let’s see if we can record our first win in six league games when we head to the London Stadium.