The unique name attached to Spurs makes them a useful option at many pub quiz nights up and down the country. Name as many professional football clubs whose suffix is unique. OK so there’s Crewe Alexandra, Plymouth Argyle, Accrington Stanley and many others.

In fact, there’s quite a few but in amongst them all is our very own Tottenham Hotspur. We like to think that this makes us even more special but just how did the name come about?

Origins of the Club

If you know your history then you’ll be aware that the club was originally formed in 1882 as the Hotspur Football Club. It consisted of a group of boys from Tottenham Grammar School and Saint John’s Middle Class School.

It’s stated that while these lads played against each other and played together on an informal basis, the decision to form an official club was made one night under the shadows of a lamppost on Tottenham High Road. The exact date of this meeting is unknown but it has since been marked down as September 5, 1882.

Annual subs were set down at sixpence and at that time, the club had eighteen members but, back to the original question, what about that name?

What’s in a name? 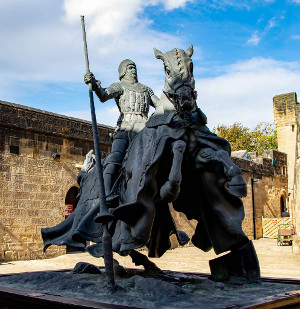 The statue of Sir Henry Percy

It’s believed that the name Northumberland Rovers was originally suggested due to the club’s proximity to Northumberland Park. However, after some debate, they settled on the name Hotspur Football Club. This was in honour of Sir Henry Percy, a late-medieval nobleman who was a captain in the Anglo Scottish Wars. He was better known as Harry Hotspur having been cited in the Shakespeare play Henry IV Part One.

He was known as a fearsome warrior and therefore had the character that would be an ideal fit for a sports team.

Henry Percy’s family owned land in the Northumberland area of Tottenham and the nickname stuck. From that point in 1882, the Hotspur Football Club was born.

We’re not quite at the point where we can close the story. How did we get from Hotspur Football Club to the name that we know today? From those early days, the club progressed and began to compete in officially organised leagues. The nickname Spurs was also established in 1883 before the big change came a year later.

Due to confusion with another organisation known as Hotspur (correspondence was being sent to incorrect destinations), the club chose to acknowledge its surroundings and, in 1884, it was officially renamed as the Tottenham Hotspur Football Club.

And that really is the story as far as that unusual name is concerned. We’re very proud of it, and its origins, and we expect it to remain for many hundreds of years to come.