The morning after match previews are starting to get a little tiresome when Spurs just can’t hold on to a lead. Once again, Mauricio Pochettino’s men were pegged back by Leicester City on Saturday after going in front but worse was to come as we were sunk by a late James Maddison winner.

The nonsense of VAR had its part to play but this was another poor display by a Tottenham team who, at the very least, shouldn’t be involved in a battle to scrape into the top four.

Spurs started with Paolo Gazzaniga in goal as Hugo Lloris attended the birth of his third child. Christian Eriksen started on the bench amidst recent criticism of his performances as Moussa Sissoko and Tanguy Ndombele were recalled.

It all started positively enough and Tottenham took the lead on 27 minutes following a brilliant piece of improvisation from Harry Kane. The England captain was almost horizontal as he forced the ball past Kasper Schmeichel and for once, we managed not to concede in the dying moments of the first period.

That proved to be little consolation in the second half and the turning point came on 64 minutes. Serge Aurier appeared to put Spurs ahead but with Son Heung-Min’s sleeve proving to be offside, the effort was chalked off. Within six minutes, Ricardo had levelled it up for the Foxes before Maddison’s late long range strike kept the points at the King Power. 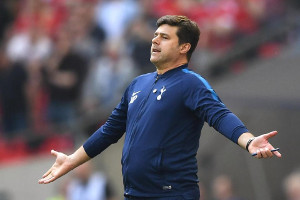 After the game, Mauricio Pochettino touched on the VAR call while giving his overall assessment on the defeat.

We conceded two goals and then it’s difficult to win games like this.

We played well, we need to be happy about the performance overall, but disappointed because we cannot maintain the result. In nearly all the games we were leading and always something happened where we conceded and we need to improve. If not, it will be tough to win games.

It’s tough because I think we were the better side. We had a bit of bad luck, the decision went against us today to make it 2-0 but in the end it was 1-1 and then 2-1 to Leicester.

Prior to the Leicester game, Spurs sat in third place – a position that has now been claimed by Leicester City themselves. The Foxes had enjoyed a bright start to the campaign and losing at their home ground is no disgrace but it’s not been the most inspiring start to 2019/20 from this Tottenham side.

We were ahead of a clutch of teams on eight points but the loss sees us slip down to seventh. Our next game is on Tuesday as we take on Colchester United in the EFL Cup while, in terms of Premier League action, we will host Southampton this Saturday in a 3pm kick off.

While some will be disinterested in the cup game, it may offer a chance to see Ryan Sessegnon and others in action and hopefully will provide a midweek boost. From there, it’s more important to take three points from the Saints and to start to get this wobbly campaign back on track.