Watford 0 Spurs 0: Could Have Been Worse

Given the pre-match comparisons in form between these two sides, a share of the points might just be a welcome result. Watford had been resurgent following the appointment of Nigel Pearson and the return of Club Captain Troy Deeney but it was the skipper who wasted his side’s best chance to clinch the game.

The solitary point does little to aid our Champions League hopes, although fourth placed Chelsea lost away to Newcastle, but at least it stems the run of two straight defeats.

There’s little to report on this match and social media confirms that neutrals were quick to switch off the live lunchtime broadcast. Tottenham had a good shout for a penalty inside two minutes while Watford keeper Ben Foster was called into action by Son Heung-Min and Dele Alli in the first period.

The action, what there was of it, came in the second period. Troy Deeney had his spot kick saved by Paulo Gazzaniga after Jan Vertonghen had handled in the box. It was a relatively tame kick by the Hornets’ Captain but our keeper naturally deserves the credit for keeping this out.

Finally, in the dying moments of a forgettable game, Erik Lamela’s effort was hooked off the line when one more roll of the ball would have secured all three points. It might just have been deserved and our manager, Jose Mourinho was convinced that we should have come away from Vicarage Road with much more. 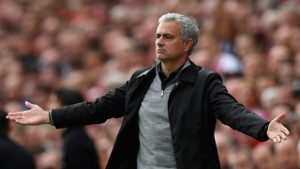 Speaking to BT Sport after the game, Jose said:

I think we deserved to win this match. To lose would have been too harsh on the boys.

The result is unfair. I think it would have been more unfair if we lost.

We had the control of the game, particularly in the first half. We arrived in dangerous positions. We created chances but we did not manage to score.

Spurs fans caught a first glimpse of Gedson Fernandes as he came on with ten minutes to go to replace Giovani Lo Celso. With the Portuguese international having time to settle at the club, could we see him start the game on Wednesday with Norwich City?

The game against bottom of the table Norwich might just give the manager a chance to take a serious look at Gedson and other personnel. The absence of Troy Parrott from the match day squad got fans talking again – he may only be 17 but with the club firing blanks at the moment, surely the Irish international deserves a place on the bench at the very least?

That game is starting to look like a must-win in terms of Champions League qualification, particularly with Manchester City arriving in North London to provide our next EPL fixture. With Chelsea losing on Saturday, the gap between ourselves and fourth place is now reduced to eight points but we find ourselves in eighth with Sheffield United, Wolves and Manchester United all above us.

A convincing win would also give us a lift after a difficult period and you will be able to read our full match preview of that Norwich tie.