Unless you are one of the lucky few to have got a ticket for Sunday’s game, it’s time to take up a viewing position from behind the sofa because it’s North London Derby time. We’ve enjoyed far greater success in this fixture of late but it’s the one that we dare not lose. While some of us will be quietly confident, others will be far more nervous as kick off approaches.

Beyond the question of bragging rights, the points are vital as we look to maintain our bright start to the 2020/21 campaign that saw us hold on to top slot at the conclusion of last weekend’s fixtures.

The big developing news this week related to Harry Kane who sat out Thursday night’s 3-3 draw with Linz. Manager Jose Mourinho attached some mystery to the issue when he wouldn’t divulge the nature of the injury but he did state that Harry was in with a chance of facing Arsenal.

Also believed to be in the frame are Sergio Reguilon and Carlos Vinicius who remained behind this week. Jose also effectively ruled out Erik Lamela and, while Toby Alderweireld remains a major doubt, his return to training appears to be ahead of the original schedule. Further updates and possible confirmation will come via the manager’s press conference closer to the game.

Spurs are an odds on selection with most bookmakers while some have pushed us up to the 1/1 mark. You can claim those Even Money odds with 888Sport and SportPesa while the draw is next on the list at 27/10 with Unibet. Completing this market is the away win which is available at 3/1 with Betway and 888Sport.

Our 0-0 draw away to Chelsea last Sunday kept us on top of the Premier League table ahead of this weekend’s early games while Arsenal went down 1-2 at home to Wolves later in the evening. Our opponents’ form isn’t good and their only wins in their last six matches have come against Molde and Rapid Vienna in the Europa League.

There is, of course, the old cliche, telling us that the form book can go out of the window for Derby games and, while it’s a tired expression, it does have an element of truth. Therefore, we won’t be getting too carried away by those odds on figures. 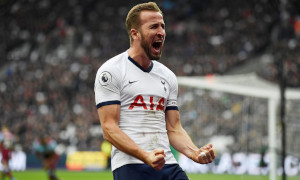 Harry Kane is a regular favourite to open the scoring and our main striker is on offer at best industry odds of 7/2 with Unibet and 888Sport to find the net first. Although the reports of his involvement are encouraging, you may want to check the confirmed team sheets before staking on Harry.

Just behind is Carlos Vinicius at 23/5 with 888Sport and, even if the Brazilian were fit, he’s almost certain to start on the bench. Son Heung-Min is listed at 9/2 and Gareth Bale at 11/2 (both Betway) while Arsenal’s Pierre-Emerick Aubameyang is also quoted at 11/2 with Unibet and 888Sport.

Other picks for Spurs in the first goalscorer betting include Steven Bergwijn at 15/2 with Unibet, Lucas Moura at 17/2 with 888Sport, Dele Alli at 12/1 with SportNation and Giovani Lo Celso at 16/1 with BetFred.

Moving on to Both Teams to Score, this is quoted for Sunday’s match at best odds of 4/5 with BetFred and GentingBet. Although BTTS hasn’t dropped with great regularity for Spurs in recent weeks, it’s a surprise to see it so close to Even Money.

There could be some value in the Total Goals betting too and Over 2.5 is available at a relatively long 10/11 with Betway. We were looking to Under that 2.5 line and were hoping to go above Even Money but we have that same 10/11 price – this time with VBet.

Anyone with a little more optimism here can go Over the 3.5 goal line where best odds of 12/5 with SportNation and RedZone are attached. As for the Correct Score bet, neutrals might be interested in the 1-1 draw which carries the shortest price of 6/1 with BetFred.

Alternatively, a 2-1 scoreline in favour of Spurs is listed at 8/1 with 10Bet and GentingBet while the same outcome for the away side is available at 12/1 with SportNation and RedZone.

The corresponding fixture between these two sides was pushed back to July 12th after project restart. The question of who would finish higher in the table was still to be decided at that point so the 2-1 win was a very welcome one after a patchy run of form.

Arsenal opened the scoring on 16 minutes but we quickly drew level three minutes later thanks to Son Heung-Min. With a draw looking to be a likely outcome, Toby Alderweireld’s goal on 81 minutes sealed all three points.

Earlier in the season at the Emirates, we came away with a respectable 2-2 draw at the very beginning of September but it should have been so much better. Harry Kane’s penalty on 40 minutes doubled the lead after Christian Eriksen’s 10th minute opener but we couldn’t hold on until half time. That was a failing of ours at times in 2019/20 and, after Alexandre Lacazette pulled one back in first half injury time, Pierre-Emerick Aubameyang levelled in the second period.

Current form and whatever benefit home advantage offers at the moment means that there are no surprises in the result betting. Despite the Europa League side slipping up in the week, we’ve been solid in the Premier League while Arsenal have that poor run of form coming into Sunday.

Clearly we’re not going to jinx anything by tipping the home win. We suspect a draw might be in the offing which we’d take so we’ll round off with these three suggestions. Both Teams to Score looks far more likely and at odds of 4/5 it’s not bad value.

Under 2.5 goals is more of a ‘punt’ and, at 10/11, you may want to skip it. We were edging towards the one goal winning margin for either side but are uncomfortable with suggesting an away win. We’ll therefore finish off with Sonny to score at any time in 90 minutes. He played an important role on Thursday but with doubts over both of our main strikers, he’s likely to be involved from the start once again.