Following a pretty dismal performance against Sheffield United on Thursday night, Spurs have to pick themselves up and rejoin the battle for Europa League places. It had been a largely positive return to action for the club but, at the same time, it wasn’t exactly a convincing one.

Old issues came back into focus at Bramall Lane and we’re left with a race for the final Europa League slot and, for what it’s really worth, the aim to finish above the other North London side. They would be fairly hollow consolations for a club that reached the final of the Champions League last year but that’s where we are right now.

Having compiled this on the Friday morning following the Sheffield United game, there is little available in the way of confirmed team news. The absentees from that match – Juan Foyth, Troy Parrott and Japhet Tanganga – are likely to miss out once again and it may be the case that the trio are unavailable for the remainder of the campaign.

Otherwise it could be a case of ‘as you were’ and, with a virtually full squad to select from, there’s even less scope for a post match excuse.

You can get odds against prices on all three possible outcomes but Spurs are clear favourites in most cases. Tottenham are available at best industry odds of 22/19 with VBet while the same bookmaker has the top price on a win for Everton at 34/13. The draw, meanwhile, is a narrow third favourite at 13/5 with Unibet and Betway.

The last two games between these two sides have ended in draws but Tottenham’s recent record against Everton is an excellent one. You have to go back to December 2012 to find the Toffees’ last victory in this fixture and, in the intervening period, we have won seven and drawn seven.

As for form, we have those four points from our three matches since project restart kicked in while Everton are unbeaten and have claimed seven points in that same period of time. Of course it should be a home win but few punters will take Tottenham with any great confidence. 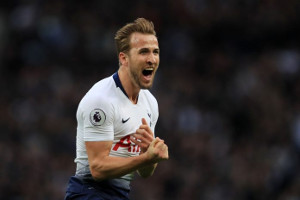 Harry Kane has scored two of Spurs’ four goals since the Premier League’s return and he’s an obvious favourite to open the scoring on Monday night. Kane is on offer at best odds of 19/5 with 888Sport and Unibet while Son Heung-Min is next at a top price of 11/2 with Ladbrokes and SportNation.

Everton strikers follow and the third favourite in the first goalscorer market is Dominic Calvert-Lewin. The England Under 21 striker is quoted at 23/4 with Unibet and 888Sport while his teammate Richarlison is slightly further back at 13/2 with VBet.

Some longer range options, from a Spurs’ perspective, might include Lucas Moura at best odds of 9/1 with Coral and SportingBet, Erik Lamela at a top price of 12/1 with BetFred and SportPesa or Giovani Lo Celso at a best of 20/1 with BetFred again.

Looking at our regular list of side bets, Both Teams to Score is on offer at 14/19 with Sportnation. Between ourselves and Everton, we’ve managed a modest return of seven goals in six combined matches but we can usually rely on BTTS when Spurs are involved.

As for total goals, betting over the 2.5 line will currently return best odds of 13/14 with VBet. It’s rare to see this market come so close to Even Money so there may be some value in that figure. We’re tempted to be a touch braver and go to Over 3.5 which is listed at a generous top price of 9/4 with VBet and Sportnation.

That brings us on to our suggestions for the Correct Score market where we suspect we may be in for a high(ish) scoring draw. A 2-2 final scoreline can be taken at 13/1 with SportingBet but for those who retain hope of a narrow home win, 2-1 to Spurs is on offer at 11/1 with Coral and GentingBet.

While Richarlison tends to take more of the headlines, Dominic Calvert-Lewin is Everton’s leading goal scorer at this stage of the season. The 23 year old also has a much higher strike rate but both men are likely to pose a threat to a fragile Tottenham defence.

Nobody can really call this game with any great confidence. The benefit of home advantage has been negated while form is pointing to a draw or, possibly a share of the points. We’ve been saying throughout the season that we want to stay positive but it’s hard not to want this long, extended and disappointing campaign to come to an end.

As for predictions, we are edging towards a draw but in terms of less risky bets, we’ll start with Both Teams to Score. BTTS is always a likely candidate and with Everton looking sharp at times, it should drop in. We also suspect that there will be plenty of goals in this and, a price of 9/4 on Over 3.5 goals is too rare and generous to turn down.

Finally, the tip on Lucas Moura to score at any stage in 90 minutes will get little support but, with the Brazilian drifting after a barren spell, his odds may also have some value. He doesn’t score many – or enough – but a best of 7/2 with Coral is a fair price.

We’ll leave you with these picks and hope for a more positive outlook when we meet next week ahead of the trip to Bournemouth.