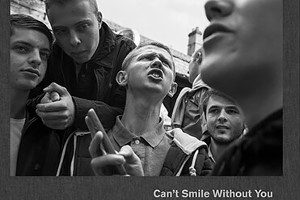 If you ever want to read a book about Spurs then do drop us a line as we can recommend a whole host of them. Start with The Glory Game by Hunter Davies and then come back for a few more pointers.

There’s a great choice to work through but a new publication from Martin Andersen is unlike any other. Titled ‘Can’t Smile Without You’ the book features an extensive selection of stunning photographs highlighting just what it’s like to follow Tottenham Hotspur Football Club.

Martin became a Spurs fan at a very early age and began to follow the team regularly when he moved to London in the mid-90s. As for the book itself, it kicks off in 2013 and continues until the last game at the old White Hart Lane Stadium in 2017.

All of the photos are in black and white and they reveal candid shots of Spurs supporters at games both home and away. There are many images to work through but our favourites include a street scene ahead of Arsenal away in 2015 and crowds gathering for the League Cup Final against Chelsea in the same year.

It struck us that the timing is perfect here: With Christmas just around the corner this must be a perfect stocking filler for any Spurs fan and you may even spot yourself among the many striking images shown between its pages.

It’s the candid nature of the photos that really hit home: With nothing deliberately posed, regular football fans can empathise with the feeling of watching your team both home and away while those who travel only sparingly will now get a clue at to what it’s like.

There are a couple of good links which showcase a selection of pictures. If you can bear loading The Sun website then you can check:

or there are some more here –

Meanwhile – Can’t Smile Without You is available at: