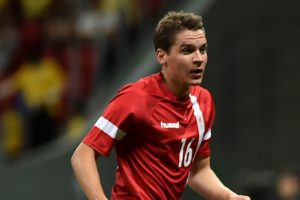 Over fourteen months of transfer rumours and the gossip columns are no closer to calling a confirmed Tottenham signing. Lucas Moura was the last man to start afresh when he crossed over from PSG in January 2018 but since then, it’s been nothing but rumour and contention.

We’re still a few months away from the next transfer window but with a new stadium finally set to open, surely Spurs will break their hiatus this summer. That’s the feeling among fans at least and the man currently in the frame is FC Copenhagen’s Robert Skov.

Stories have circulated this week claiming that Tottenham are preparing a 20 million Euro summer bid for the player but what do we know about Skov and would the transfer make sense?

At 22 years of age and without a full international cap at the time of writing, Skov seems to be one for the future rather than the finished article. He plays on the wing at Copenhagen but first started out at Silkeborg where he made his debut as a 16 year old.

After five years with his first club, Skov left Silkeborg with a healthy scoring return of 23 goals in 102 appearances and that’s decent enough for a wide man but at Copenhagen, that ratio has exploded. 22 goals in 39 games at the time of writing are said to have made a number of Premier League sides take notice but according to Sky Sports, it’s Spurs who are in pole position.

A full Danish cap must be imminent but do Spurs have an immediate need or would Robert Skov remain on the fringes of the squad for a time? The man most likely to make way for a new arrival might be Erik Lamela. The Argentine returned from a long term injury at the end of last season and has shown glimpses of why he was once a club record buy. However, there have been further ‘niggles’ across the 2018/19 campaign and Lamela is far from a regular starter.

Newest arrival Lucas Moura could also be put in the same bracket: There are signs of a world class player but a lack of consistency keeps Lucas on the sidelines more often than not. A double strike away to Manchester United has been the highlight of his Tottenham career to date but will it also be Lucas’ legacy?

Tottenham fans will continue to seek a tangible back up striker to Harry Kane but availability in that respect is sparse. A wide player may be a more logical target but is Robert Skov the man to finally end this transfer drought?