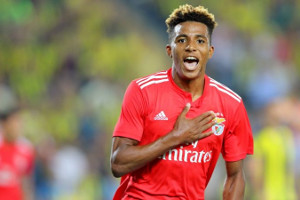 Our first signing of the winter window and the first new arrival in the Jose Mourinho era is now inked in. By Tottenham’s standards, we have moved rather quickly to secure the services of Gedson Fernandes who arrives from Benfica on an 18 month loan.

According to reports there was plenty of interest in the 21 year old but what are we getting and what can we expect from the Portuguese international during his time here?

In terms of pure playing statistics, Gedson had been a one-club man up to this point, starting his playing career with Benfica’s B team in 2017 and moving up to the first team a year later. He made his debut in August of 2018 in a Champions League qualifier against Fenerbahce and has been with the senior squad ever since.

Fernandes has also moved up through the youth ranks of the Portuguese national side. From Under 15 level onwards, the midfielder has been something of a permanent fixture in the national set up and he made his full international debut in 2018.

Those are impressive landmarks for a player of his age but despite the fuss generated at the start of this transfer window, Gedson Fernandes has been unable to nail down a permanent place with his parent club Benfica. With that in mind, just what are Spurs getting?

Gedson has been described as a true ‘box to box’ midfielder and in that sense, he could be the perfect man to address Jose’s frustrations. The manager is clearly unimpressed with Tanguy Ndombele’s injury issues and with Moussa Sissoko now sidelined until April at least, there is an urgent need to fill the void.

Fernandes has also been likened to Paul Pogba but Spurs fans might prefer the comparison to Mousa Dembele. The Belgian international is much missed and Dembele mark 2 would be the preference if those suggestions are to be believed.

For those of us that haven’t exactly been following his career, Gedson seems to carry plenty of pace and power and looks comfortable with the ball at his feet. He’s strong defensively too which is an obvious bonus. The youngster doesn’t score too many but that’s a job for others further up the park.

Speaking for the first time to the club’s official website, Gedson Fernandes credited Jose Mourinho for influencing his decision to join Spurs.

All players, all young players want to work with him because he’s one of the best and all of us want to stay near the best. So it’s fantastic.

It’s been obvious over the last few weeks that Tottenham’s midfield is in need of a boost and that the squad is in need of new faces as a whole. Gedson steps in and he’s very welcome but let’s see if he can make an impact during his time with the club.