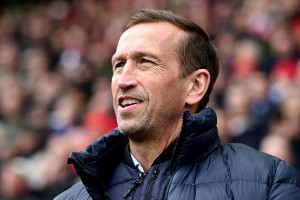 Like the rest of the Spurs fraternity, we were shocked and saddened to hear of the passing of Justin Edinburgh at the weekend. It’s always sad when we lose one of our own but at the age of 49, Justin’s death was sobering news.

The defender came to us from Southend United in 1990 and went on to become our first choice left back for much of the next ten years. He would famously become the only player to win medals in both of our domestic cup successes of the 90s.

In the first of those games – the 1991 FA Cup Final against Nottingham Forest – his verbal assault on a young Roy Keane rather epitomised the nature of our player. Eight years later in 1999, Justin Edinburgh became a focal point once again in our League Cup victory over Leicester City.

Sent off harshly for raising his arms to Robbie Savage – an action that gave his opponent a perfect opportunity to overreact – Spurs won win a late Alan Nielsen striker and Justin was happily, allowed to climb the Wembley steps for a second time to collect his medal.

While he may not have been the most talented defender to have ever appeared for the club, Edinburgh made the best of his ability and was a combative player over ten years at White Hart Lane.

In 2000, Justin finally left White Hart Lane and spent three, largely unproductive years at Portsmouth before seeing out his playing days at Non-League Billericay Town. It was during that spell with the Essex side that our former left back began a 16 year career in management.

In time, after spells with Grays Athletic and Fisher Athletic, he would take the reins at Newport County, Gillingham and Northampton Town before joining up with Leyton Orient in 2017. It’s fair to say that Edinburgh’s time with clubs in the lower leagues produced a mixed bag. There was some success with Newport but his spell at Northampton was to last just eight months.

At Orient, however, he transformed a club that had fallen out of the league ladder and looked to be tumbling even further. Following the Os promotion at the end of 2018/19, Justin should have been looking forward to a season back in League Two. He was finally starting to realise his potential as a coach and manager but sadly, his time was cruelly cut short.