RB Leipzig 3 Spurs 0: A Procession and Spurs are Out

It seems that as a club, Spurs are out of miracles and a season that is in danger of imploding is simply getting worse. With a 1-0 deficit carried over from the first leg, this round of 16 tie against RB Leipzig was still alive but within 21 minutes of the return, it was all over.

Two, early first half goals from Marcel Sabitzer ended the contest and in the second half, something of a damage limitation exercise kept the aggregate score down to 4-0 in favour of the German side.

Tottenham started brightly enough but Sabitzer’s double left us with a long 70 minutes to endure. Hugo Lloris could have clearly done better with both strikes and, along with Serge Aurier, it was a night to forget for the French international keeper.

The second period produced little in the way of a fightback and across the game, Spurs only had three shots on target. The efforts from Dele Alli, Giovani Lo Celso and Gedson Fernandes were comfortably dealt with and the tie was settled when substitute Emil Forsberg scored with his first touch of the game late on.

It was a night to forget and the mood was summed up by Tottenham manager Jose Mourinho after the game. 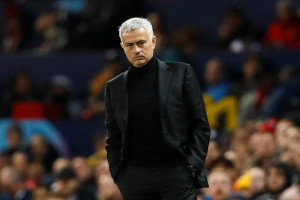 As quoted on the BBC’s official websites, Jose said:

We all believed but we know that in this moment it’s very difficult. They are a very strong side.

It’s hard for us to score at the moment. Our first couple of mistakes they score and then it’s very difficult. Their physicality is incredible, their defenders win the duels, they stop the game. They are very fast in attack. They can hurt us all of the time, they deserve to go through.

We made mistakes, mistakes that we have analysed in previous matches.

Mathematically at least, the race for Champions League football next season is far from over. With nine games left to go in this Premier League campaign, we are seven points behind Chelsea who currently occupy fourth place and there is that possibility that the final UCL slot will go down to fifth at the end of the season.

One of the issues comes up on Sunday as we face a Manchester United side who have seen an uplift in form since the arrival of Bruno Fernandes in January. It’s an example of how one man can transform a team but United also underline what you can do when you have a good depth of squad.

Injuries can be blamed but failure to act in the transfer market and failure to heed the previous manager’s calls for a painful rebuild are behind this collapse. We’ve gone six games without a win and that’s likely to extend to seven this Sunday. We always say that we like to remain upbeat and positive but it’s impossible right now. Do leave a comment that might cheer us up as we look ahead to the remaining fixtures and wonder just where the next victory is coming from.