POSTPONED DUE TO THE CORONAVIRUS PANDEMIC.

Another weekend draws close and once again, we have to find some optimism from somewhere as we go into a critical fixture. Once we were just battling Chelsea in terms of Champions League football for next season but, following an uplift in form since the January transfer window, Manchester United are now the closest rivals to the Blues for fourth spot.

There is still the battle for Europa League football – if anyone wants it – so let’s now see if we can offer any hope ahead of Sunday’s 4.30pm kick off.

We completed our preview of the RB Leipzig game before updates on Steven Bergwijn’s injury came through. The Dutch international, like Harry Kane, Moussa Sissoko and Son Heung-Min, is now set to be out for the majority of the season after picking up a ‘significant sprain.’

Elsewhere, Davinson Sanchez and Juan Foyth may be set to return but the game is likely to come too soon for Ben Davies who is pencilled in for West Ham next Friday. There are no suspensions to add to this list so the news is largely unchanged from the midweek updates.

We’re at home but we’re not favourites in this game as Manchester United head the result market. Ole Gunnar Solskjaer’s men are on offer at best industry odds of 5/4 with Unibet while Tottenham can be picked up at a top price of 27/11 with SportNation. As for the draw, it’s back to Unibet for the best numbers at 49/20.

Neutral punters will see that there is some good value to be had if they can make the right call and let’s face it, the majority of them will be looking to back Manchester United. Our opponents on Sunday are unbeaten in their last five while we haven’t won at all in our last six.

We’re descending a little here so let’s park the result now and see if there are any players who can make us feel optimistic over this fixture. 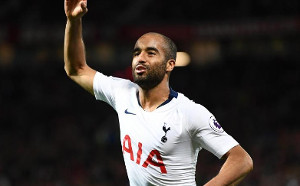 The absence of our main goal threats means that Manchester United players occupy the top four places in the first scorer betting. Anthony Martial gets things underway at best odds of 17/4 with Unibet and 888Sport while Odion Ighalo follows at a top price of 6/1 with VBet. Loan signing Ighalo is a clear second favourite with most bookmakers but you can also pick up Bruno Fernandes and Mason Greenwood at that same best of 6/1 – this time with Unibet and 888Sport.

Finally we come to a Spurs representative with Lucas Moura quoted at best odds of 15/2 with SportingBet and GentingBet. Lucas hasn’t scored since Son Heung-Min’s injury and was one of those who needed to step up to fill the gap left by Sonny and Harry Kane.

Moving through the list, Dele Alli is next up at a top price of 8/1 with VBet while Erik Lamela is at a best of 12/1 with SportNation, followed by Giovani Lo Celso at best numbers of 12/1 with Unibet.

A goal from anywhere would be welcome and the strikes that have come in since Son’s injury have been shared around. Therefore, if we’re going to stay loyal and pick a Tottenham player, it’s going to be a tough call. Lucas would have been the preference but that goal-shy response to the last few games suggests that we could look at Dele Alli once again. If he’s taking the spot kicks then that gives us more options and a Dele goal in the anytime market at a top price of 3/1 with 888Sport and Unibet is as likely a pick as we can find from a Spurs point of view.

Moving to our regular set of remaining side bets and we’ll start, as always, with Both Teams to Score. We’re tentatively tipping an anytime goal for Dele Alli and we’re fairly certain that Spurs will concede at the other end so BTTS looks to be safeish at 13/15 with SportNation.

We now move on to total goals and this is one of those rare occasions where Over 2.5 has just sneaked above Even Money. Coral and Ladbrokes are among a number of firms quoting odds of 11/10 and that may well represent decent value. Only three of our last five games would have delivered a profit for this particular bet but with United offering more potency in attack, it looks more likely here.

We’ll conclude with a couple of correct score tips which also chime in with the suggestions that we’ve made so far. If we can overturn that wretched run of form, a final score of Spurs 2 Manchester United 1 would currently offer a profit at 47/4 with 10Bet while the same outcome in favour of the opponents is available at 17/2 with GentingBet and SportingBet.

Spurs were among a number of clubs linked with a move for Sporting Lisbon midfielder Bruno Fernandes and, presumably, all of those sides with the exception of Manchester United, are now wondering why they didn’t act.

The only bit of good news from our point of view is that we now have a new dangerman to write about. The clever free kick that led to United’s first goal against Manchester City on Sunday is an indication as to what the Portuguese will add to the side moving forward and while scoring goals isn’t his main role, Fernandes has three from his first nine games in England. It’s a new threat and one that has helped Ole Gunnar Solskjaer’s side to go on that long unbeaten run.

The teams first faced each other back in 1899 when Manchester United were known as Newton Heath. That was an FA Cup tie and after a draw in the first game, we won the return by five goals to three. Overall, United have the upper hand in the fixture with 92 wins. Spurs have claimed victory in 52 matches and there have been 48 draws.

Sunday’s 193rd game favours the Red Devils but is there anything that Tottenham can do to upset the odds?

During the first two thirds of the season, whenever we came up against tougher opposition we kept saying that we can do it. Right up to the Manchester City game we remained positive and that was one example where the squad came through.

Yes we have been unfortunate with injuries but the lack of investment in the players is now showing. We needed that painful rebuild – Pochettino was rarely wrong – and now we’re stretched thin and being shown up.

Can we do it? In a two horse race of course we can but it’s hard to see how. For now, let’s just move on, look for these side bets to give us an overall profit and hope for a stronger run in to the end of a forgettable campaign.