With the future of a number of Spurs players under the spotlight, this is going to be an important summer for the club and, in particular, the board and management. Difficult decisions will have to be made and one of the men in question is right back Kieran Trippier.

It could be argued that the defender was suffering from something of a World Cup hangover during the most recent campaign. Whatever the reason, this wasn’t a productive season for Tripps and at 28 years of age, this may be time for him to move on and seek an alternative employer.

Often in these cases, a club can make an approach and take the decision out of our hands and we may just have seen this with Kieran Trippier. Reports began to emerge on Monday afternoon that Serie A giants Juventus had made an enquiry about the defender. It may seem an unlikely link but Juve had a need in that position and, if they remember the World Cup and don’t watch too many YouTube videos from the 2018/19 campaign, they could be primed to make a move.

Serie A Rivals Napoli are also believed to be interested in the former Burnley man but how does he view his own situation at the new White Hart Lane? 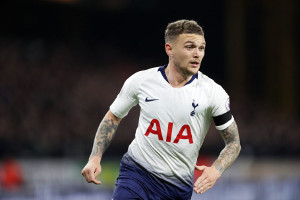 When asked by the media about his future at Tottenham, Trippier answered:

I don’t know. I go home now, spend time with my family, just recover after a long, difficult season. Everybody’s got a decision to make.

Obviously this club has been very good for me over the last few years but I’ll enjoy my summer, come back in pre-season and that’s when I’ll sit down with the manager and have a talk about my future.

I see a lot of speculation about me not being here. I give everything, 100% every game, win lose or draw. So we’ll see what happens in pre-season.

It would seem, judging by the player’s comments, that it really is down to the club. When Spurs sold Kyle Walker to Manchester City, Kieran Trippier was emerging as the preferred option at right back and he’s gone on to serve the club well for most of the interim period.

In 2018/19, however, he’s lost his England slot to Trent Alexander-Arnold and in all honesty, when you watch the Liverpool man play it’s easy to see why. Tripps has lost that crossing ability and that was key to his game when he was contributing regular assists to the side.

There is, of course, the question of who replaces Trippier if he does go. Serge Aurier hasn’t exactly been convincing when he’s been given the opportunity and the Ivory Coast international is also the subject of outgoing transfer gossip this summer.

So that means buying in a replacement or putting complete faith in Kyle Walker-Peters and bringing another youngster through the ranks as back up. Those are the options but what’s your opinion?