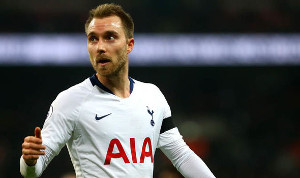 While his words haven’t been exactly replicated in some areas of the press, it does seem as though Christian Eriksen may be set to end his Spurs adventure. On Wednesday, the Danish midfielder was trending at the top of the social media charts in view of some comments made surrounding his future at the new White Hart Lane.

Some saw it as a ‘Come and Get Me’ cry to Real Madrid but all seemed to be agreed. Eriksen is surely set for a move away from his present employers in the summer.

Speaking to the media in Denmark, here’s what Christian actually said:

I feel that I am a place in my career where I might want to try something new.

I have the wildest and deepest respect for everything that has happened in Tottenham.

But in football you do not know when clarification comes. It can happen any time.”

In the wake of those remarks, most observers omitted to use the word ‘might’. It was taken as a definite sign that the 27 year old wanted out of Spurs and while that may not be exactly the case, it’s not a good sign for any Tottenham supporters that want him to stay.

There have been reports suggesting that Daniel Levy is looking for a fee in the region of £130 million to take Christian Eriksen away from North London. That may seem ridiculous in isolation but not when you put that up as a comparison to Wilfried Zaha.

Will Real Madrid or anyone else be willing to pay at that price? It’s doubtful but we know that our Chairman would be delighted to wring every single penny out of potential suitors. In return, would we ask for Gareth Bale as some reports are suggesting? Other options could involve Leicester’s James Maddinson and the Real Betis midfielder Giovani Lo Celso. It’s certainly going to be an interesting period but should we be sad to say goodbye?

In six years at White Hart Lane, Christian Eriksen has scored some vital goals for Spurs and he always seems to appear near the top of the Premier League assist charts. Despite that, there seems to be little affection among Tottenham fans who like to make their feelings known on social media.

The Dane has scored 66 goals in his time here and has contributed some spectacular and invaluable strikes. While the passage to the Champions League final gave us an unforgettable ride, where would the club be without Eriksen’s late strike against a defence-obsessed Brighton at the end of last season? The answer is, behind Arsenal and out of the Champions League places.

But, whatever your opinion may be, if we look at things from the player’s perspective, a move away seems logical. He’s 27, has given us six year’s service and, if Real Madrid are seriously interested, what would anyone be expected to do?

Having weighed up the reports, an Eriksen departure seems more than likely but we then have to hope and trust that Spurs can find an adequate replacement.