It all comes down to this: It’s been another roller coaster of a season, but Sunday could see it all end in a seriously positive way. One point is all that Spurs need to finish inside the Champions League places.

One solitary point against the league’s bottom side who are already relegated. And that assumes that Arsenal win against Everton. What could possibly go wrong?

We may be accused of being a little too pessimistic at times, but we’ve seen plenty of last season disasters in the past. Hopefully Sunday won’t be one of those occasions and the indicators are that we should be fine.

The one doubt in the Spurs camp centres around Cristian Romero. The influential defender has missed the last two games and, while Antonio Conte seemed hopeful of his chances, it looks unlikely that he will be involved.

Elsewhere, Oliver Skipp’s season-ending injury robs him of a chance to face the club where he starred in the Championship last year. We already knew about him, along with Japhet Tanganga, Sergio Reguilon and Matt Doherty who are the other long-term absentees.

There are no suspensions so it seems that Antonio will be without five players for Sunday’s kick off.

The bookies are firmly behind a Spurs victory. The best possible odds on the away win at Carrow Road currently stand at just 1/4 with VBet and SportNation. The draw is the next available option at a top price of 6/1 with Quinnbet and Betway while a win for Norwich City completes the result betting at a best of 12/1 with BetFred. 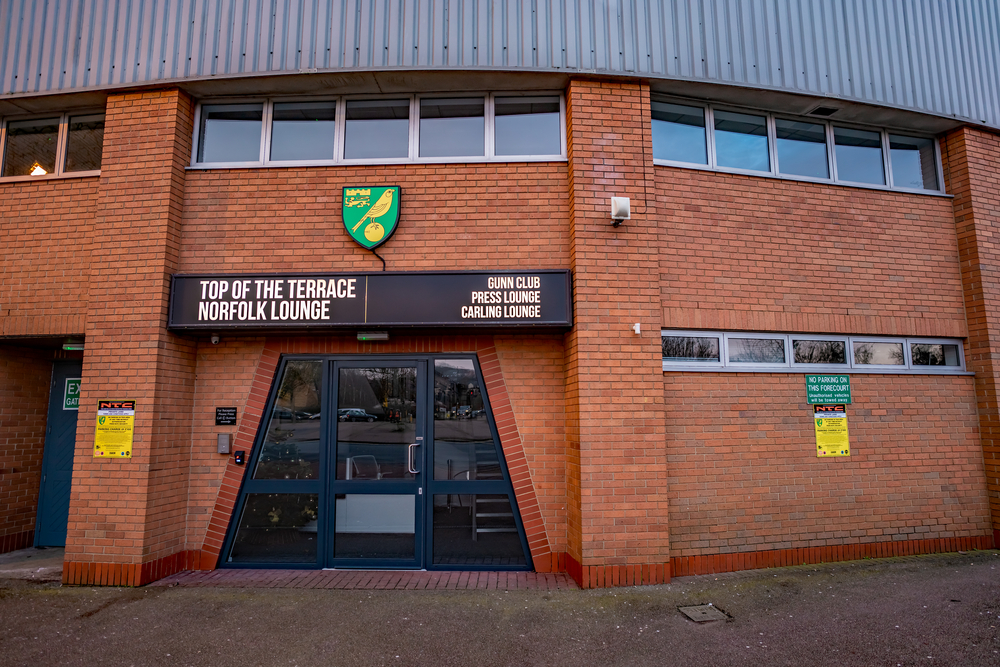 10 The exterior of Carrow Road, the home of Norwich City Football Club

The Canaries showed more fight when new manager Dean Smith took over in the hot seat. At one point it seemed as though the Canaries might pull off a great escape, but they would eventually become the first team to be relegated.

In their last six games, Norwich have claimed just a solitary point. In the same period, Tottenham have taken 11 points through three wins, two draws and a defeat. Of course, it all points to a positive 90 minutes at Carrow Road but we have been here before.

There are no great surprises in the first goalscorer betting. Harry Kane starts as the clear favourite and you can take our main striker at 13/5 with Unibet. Son Heung-Min follows at best odds of 3/1 with Quinnbet while Steven Bergwijn is available at 6/1 with Unibet again.

Dejan Kulesevksi hasn’t been a regular starter of late and he has drifted as a result to 13/2 with 888Sport and Ladbrokes. Other options from a Spurs perspective include Lucas Moura at 15/2 with Coral and SportNation, and Ryan Sessegnon at 13/1 with VBet.

The first Norwich City name on the list is that of their main striker Teemu Pukki. The Finnish international is on offer at 10/1 with Unibet. 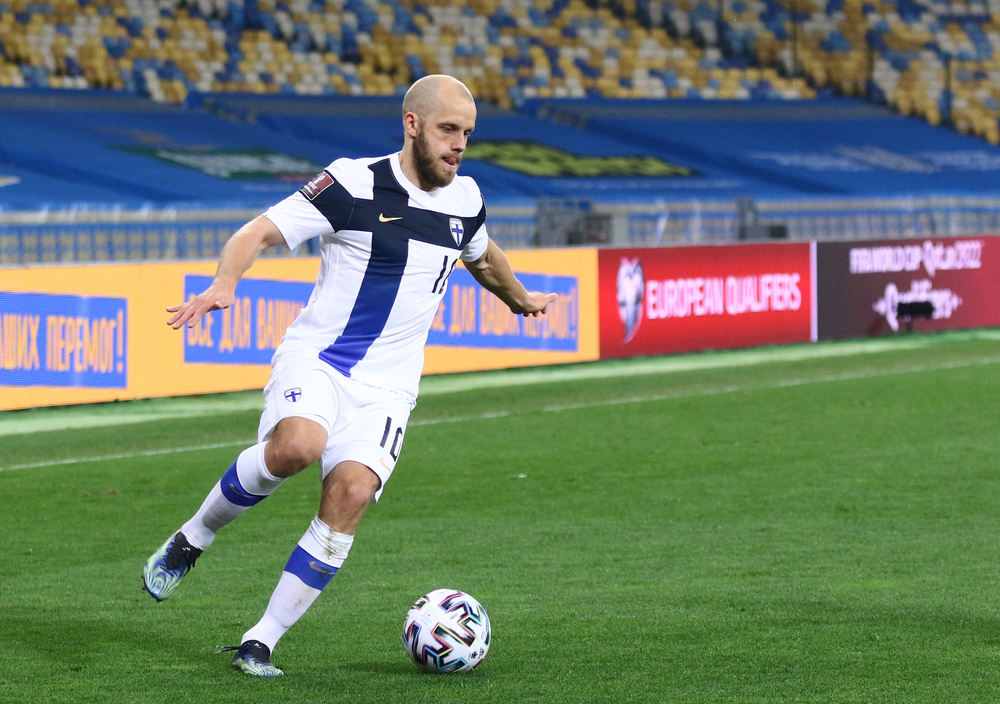 KYIV, UKRAINE – MARCH 28, 2021: Teemu Pukki of Finland controls a ball during the FIFA World Cup 2022 Qualifying round game against Ukraine at NSK Olimpiyskiy stadium in Kyiv

In team betting, the bookies aren’t expecting too much from Norwich and that’s led to some interesting numbers in the goals betting. Both Teams to Score is relatively high for this game and can be claimed at 5/6 with 10Bet. If you’re more comfortable with the ‘No’ bet on BTTS, this is available at a top price of 68/67 with VBet.

Over in the Total Goals betting, you could consider a modest option of Over 2.5 goals which is currently available at best odds of 4/9 with SportNation and Quinnbet. If you push that one stage higher to Over 3.5, the numbers climb to a top price of 11/10 with Coral and Unibet.

If you’re expecting a low scorer at Carrow Road, the best odds to go Under the 2.5 line currently stand at 19/10 with SportNation.

That leaves us with our regular look at some Correct Score suggestions and, if you are supremely confident about Sunday, you may want to consider a 3-1 away win which is quoted at 10/1 with QuinnBet. The horror of a 1-0 win for Norwich City is on offer at 40/1 with Coral and Ladbrokes and Coral while the 1-1 draw can be claimed at 12/1 with Quinnbet again.

Norwich were promoted from the Championship at the end of 2020/21 so we have a brief head to head section instead. In six games against the Canaries dating back to 2015, Spurs have not lost in 90 minutes. However, the Canaries did eventually eliminate us from the FA Cup in March 2020.

The most recent result was the reverse fixture at the new White Hart Lane on December 5th where goals from Lucas Moura, Davinson Sanchez and Son Heung-Min secured a 3-0 win, 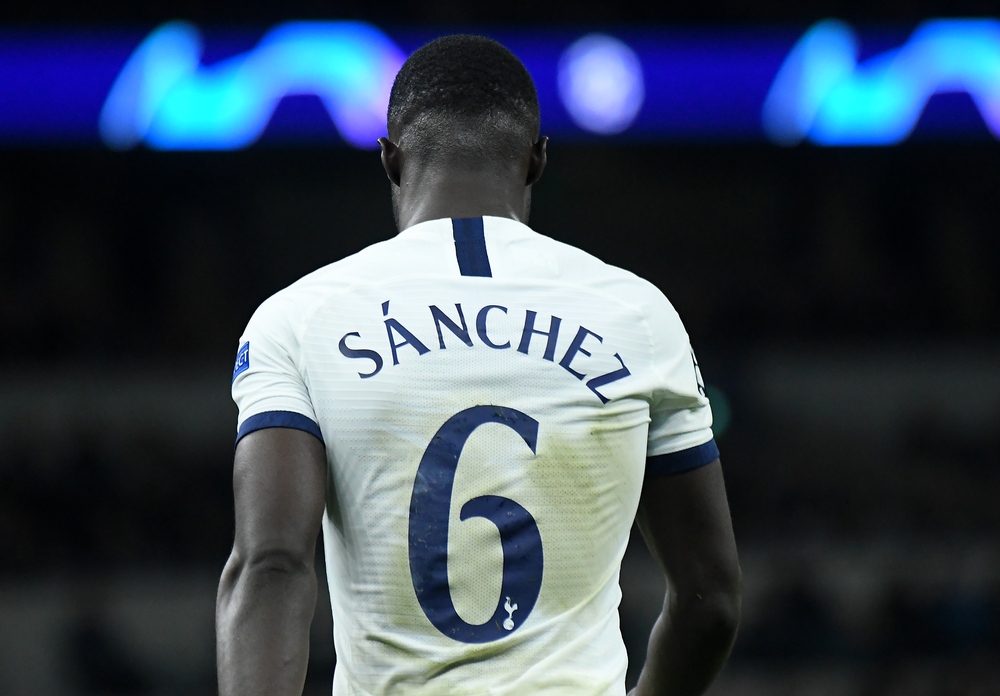 Overall, in 75 previous senior games between the two clubs, Tottenham have won 33. There have been 18 draws while Norwich City have won 24 matches. It’s all about the next one of course and we’d be happy enough just to add another draw to that list.

What’s to say here? Of course Spurs should be winning and not settling for the point that we need. Norwich City can still climb off the bottom so, in theory, they do have something to play for.

The respective quality in the two squads suggests that the Canaries’ hopes are forlorn ones, but this is Tottenham Hotspur. Whether you’re talking about being ‘Spursy’ or consulting Dr Tottenham, there is always the potential to blow it when the finish line is in sight.

Apologies if we’re being pessimistic but who, here, is 100% confident about Sunday?

Swiftly moving on, we will leave you with some tips, but we will not tease the Gods by including the result. We’ll also keep these to a minimum as some things are more important than winning a few quid.

Over 3.5 goals has tempting odds. We hope that Spurs will put Norwich under pressure and that the Canaries will concede early. In this scenario, the game will open up.

In terms of a goal scorer, Son Heung-Min has an individual battle for the Premier League Golden Boot. Sonny has some making up to do in that particular race, but he looks sharp and will be keen to get on the scoresheet.

A point – just a point will do. It would also be nice to have a calm 90 minutes where we don’t have to keep looking over to see what’s going on in North London.