Hojberg Signs but Where does He Slot In? 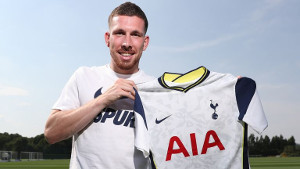 One of the least surprising pieces of transfer news was confirmed on Tuesday with Spurs completing the signing of Pierre-Emile Hojberg from Southampton. The Danish midfielder had reportedly been on our radar for some time and the deal was done for a fee of £15 million with future add ons.

Hojberg comes into the squad and will take the number five jersey which was recently vacated by Jan Vertonghen but what will he bring to the side and what impact, if any, will it make on the future of existing Tottenham players?

Hojberg was picked up by Bayern Munich at an early age and it would appear that the German giants had marked him down for big things. After a spell in the second team, he stepped up to the senior side and became Bayern’s youngest ever Bundesliga player when he made his debut in 2013 at the age of 17 years and 251 days.

If he was seen as a prodigy, it didn’t quite work out in Germany and, after loan spells with Augsburg and Schalke, Hojberg was picked up by Southampton in 2016. Four years at St Mary’s helped to re-establish his reputation and, while it’s fair to say that European giants weren’t exactly knocking on Southampton’s door, there was some reported interest from elsewhere from clubs such as Ajax and Everton.

On the international front, Hojberg progressed through the Danish junior ranks before making his debut for the senior side in 2014. To date, he’s made 33 appearances for Denmark, scoring three goals.

What will be Bring?

All indications suggest that Jose Mourinho sees Eric Dier as a centre half as opposed to a midfielder so there was a need to bring in a ball winner in front of that defence. Jose’s most successful teams of the past relied on an effective player in this position and it seems that Mourinho has his man.

Hojberg returns good stats for tackles made and interceptions while his numbers for ball recoveries were better in 2019/20 than any other Premier League player. With those numbers in mind, his role in the team will be a simple one: Provide a line of defence ahead of the back four and link into the attacking midfield positions. When Tanguy Ndombele arrived at the club last summer, he was seen as a ‘box to box’ midfielder but Hojberg doesn’t quite fill that role. He doesn’t look to get forward too often and that can mean that the defence is less exposed as a result.

The arrival of Hojberg has led to some predictable speculation as to how Spurs will line up next season. Assuming our new signing gets a guaranteed start, we will presumably slot into midfield, just in front of the defence and one of the popular calls is to allow Harry Winks to move forward.

There are a number of possibilities but Hojberg’s signing has also raised doubts over the future of Tanguy Ndombele. Our record signing arrived last summer and rounded off a promising debut with a goal against Aston Villa but that was the highlight of a disappointing campaign.

After arriving from Lyon, the French international went on to appear in just over half of our Premier League games as injury and loss of form affected his season. Worse still, Ndombele appeared to incur the wrath of manager Jose Mourinho and, as we’ve seen at other clubs, that never ends well.

Ndombele’s future at Tottenham depends on two factors, starting with Mourinho’s opinion and whether he has any intention to use him. If he doesn’t, we are left with a chairman who will be reluctant to take a hit on the £55 million transfer fee paid out in 2019.

We’ll see what happens on that point but, with one or two notable exceptions such as Harry Kane and Hugo Lloris, there are few permanent starters in the squad so there should be some scope for rotation.

The signing has been met with understated interest rather than unhinged excitement but it’s a positive step and it’s good to see Spurs doing some early business for a change. Pierre-Emile Hojberg expressed a desire to step up and now that he has his wish, it’s time to deliver on that promise that Bayern Munich spotted some seven years ago.

Above all, we welcome him to the new White Hart Lane and look forward to seeing how he develops in 2020/21 and beyond.