Could Champions League qualification all come down to one game? Tottenham’s quest to finish inside the top four certainly hinges on what happens in 90 minutes on Thursday night. Lose and it’s all about fifth place and the Europa League next season. A win means we fight on and take it down to the wire.

Our opponents obviously have the advantage in the race for that final UCL slot and are in good form, but Spurs’ draw at ‘fortress’ Anfield on Saturday should give the team some confidence.

We already know about long term absentees Japhet Tanganga, Matt Doherty and Oliver Skipp and, since writing the preview for the Liverpool game, it’s also been confirmed that Sergio Reguilon will miss the rest of the campaign.

Aside from those four names, the squad appears to have a clean bill of health and there are no suspensions to add to that list.

Despite a couple of stutters along the way, Spurs’ overall form is good and the hosts start as favourites for Thursday’s game. The best odds on the home win currently stand at 6/5 with 10Bet while victory for Arsenal can be claimed at 23/10 with Coral and Ladbrokes. Completing the result market is the draw which is available at 47/18 with VBet.

Dropping points to Brighton and Brentford has hurt our overall form and Spurs have now picked up 11 points from our last six games. In the same period of time, Thursday’s opponents have claimed 12 points. Of course, the old saying is that you can throw away the form book in a local derby and that’s probably right.

In general, it points to a close game between two evenly matched side but who are the players who can swing the result?

Harry Kane takes up his customary place at the top of the first goalscorer market and you can claim our main striker at 4/1 with 888Sport. Son Heung-min follows at 23/5 with Unibet while our opponent’s first representative is Eddie Nketiah at 13/2 with Quinnbet. 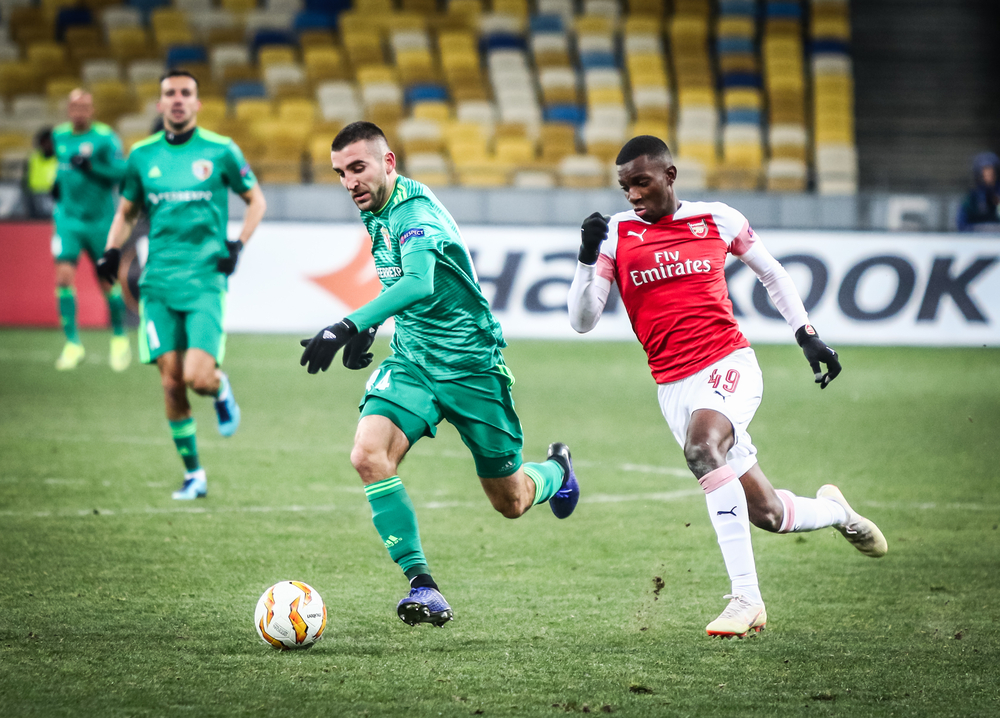 KYIV, UKRAINE – NOVEMBER 29, 2018: Ardin Dallku of Vorskla Poltava (L) fights for a ball with Eddie Nketiah of Arsenal during their UEFA Europa League game at NSC Olimpiyskyi stadium in Kyiv

Other options from within the Spurs camp include Steven Bergwijn at 17/2 with Unibet, Dejan Kulusevski at 9/1 with 888Sport, Lucas Moura at 10/1 with Unibet and Ryan Sessegnon at 18/1 with Coral and 10Bet.

Away from the individual markets, Both Teams to Score is available for Thursday night at 4/6 with VBet. If you want to take the No option on BTTS, this can be found at 6/5 with Quinnbet and Betway.

Moving across to the Total Combined Goals markets and you can take a modest bet of Over 2.5 which will currently return odds of 3/4 with Quinnbet and Unibet. By pushing up to Over 3.5 you can get a price of 39/20 with Unibet again but, if you think this will be a low scorer, Under 2.5 goals is quoted at 12/11 with VBet.

That just leaves us with a Correct Score suggestion or two. Those with a positive approach to the game can get odds of 8/1 with Quinnbet on the home win. The same scoreline in favour of our opponents is available at 11/1 with Quinnbet again while the 1-1 draw can be found at 6/1 with BetFred and Coral.

For greater detail, have a look back at our earlier preview of this game which was published before Arsenal cried off. We won’t repeat ourselves other than to say that the corresponding fixture from 2020/21 was one to remember with Spurs winning 2-0.

Son Heung-Min and Harry Kane were the scorers on the day and we would be delighted to see a repeat.

It’s always tense having to watch this game but, with so much at stake, Thursday could be unbearable. Clearly we have nothing to fear and, while a point at Anfield saw us drop off the pace, it proves once again that this Tottenham side is a match for any team.

With the added benefit of home advantage we should be winning this but we won’t fall into the trap of predicting victory. We suspect it will be a tight game with a 2-1 scoreline going either way. Clearly the hope is that it will go in favour of Spurs but we’ll base our tips around that suggestion.

Both Teams to Score and Over 2.5 goals would fall into that scenario. In terms of a goal scorer, Harry Kane has a good record against Thursday’s opponents and, while he’s not been at his sharpest in recent weeks, the 7/5 on a Kane anytime goals looks to offer reasonable value.

None of these tips will make you rich but we think that they will reflect what should be a tight and tense 90 minutes.